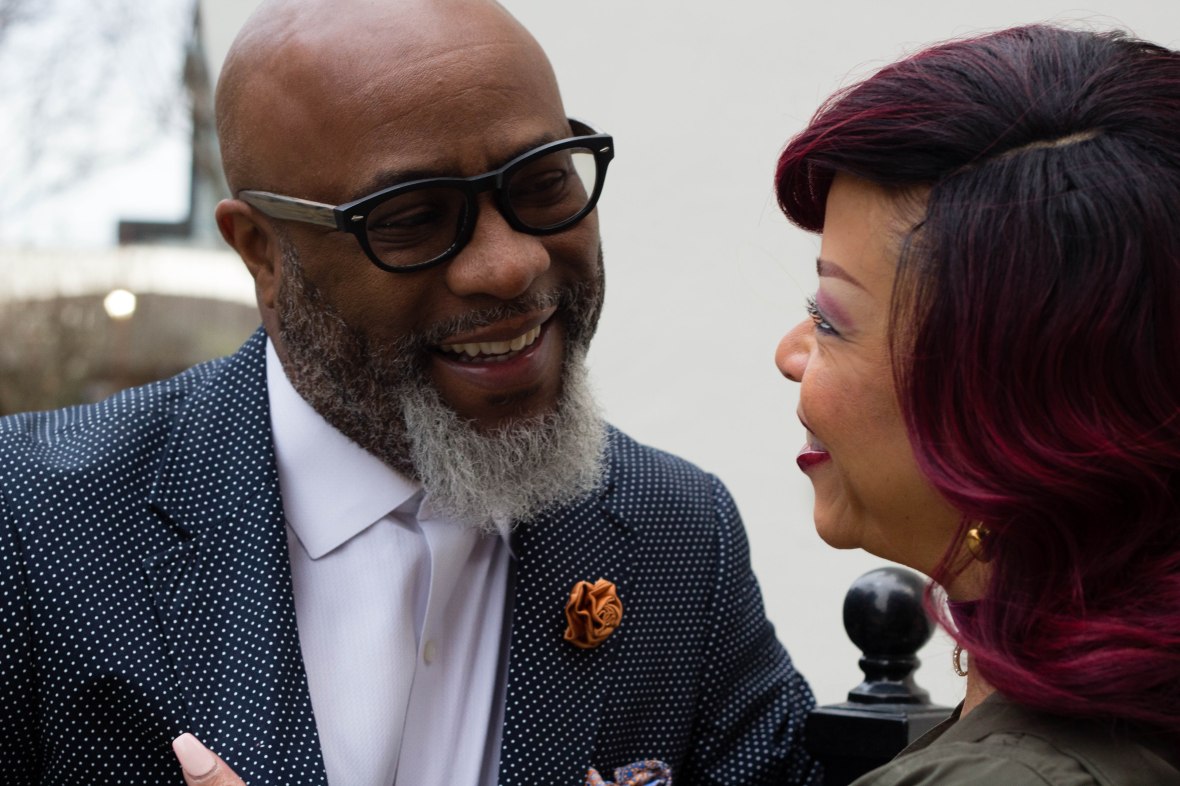 Disclaimer: I was supposed to have released this article on Wednesday, but my job and wedding planning got really hectic. I wanted this piece to be the best it could be. I apologize for the delay, but I didn’t want to rush the process of putting it together. I hope you enjoy it and learn as much as I did about relationships.

Cold weather. Saturday. 7 a.m. All of these  factors combined could make for a less than stellar photo shoot.  That was the situation a few weekends ago, but that didn’t stop married couple, Artis and Tanya Wilson, from being fearless and awesome behind my Canon lens. The Wilsons, who met in college, have been married for 33 years. I reached out to them to partake in a photo shoot and  contribute to my Ode to Black Love series, and they were happy to share their expertise in life and love. My fiancé and I have had the pleasure of soaking up their marital advice before heading to the altar next month, and I thought it was only fair to share this awesomeness with the world. Tanya, a self-published author, has already shared some of her biblical knowledge and bridal perspective about keeping a marriage fresh in her recently released book, “You Stink.” But right here, you get an exclusive interview from the partners in ministry and life. Get your pencils and notepads ready to jot down these nuggets of gold.

Tanya saw herself marrying someone quite different than Artis when she first met him in college. “I had a preference. Tall, dark and handsome,”  she says smiling. And although Artis is a handsome man who possesses the Godly qualities she wanted in a man, he didn’t quite meet her complexion or height standards. Tanya, though reluctant to date him initially, said she is thankful she gave him a chance. “We had a first date on Halloween. We hit off right away and became friends.” The couple now laughs at the irony of how they came together, especially considering how long they have been together. The lesson behind that: love sometimes comes in unexpected ways. And although they have been married for 33 years, both Tanya and Artis still look at each other with a great deal of admiration and love. Anyone who meets them can feel the magic of their chemistry. But they admit that it hasn’t always been easy with decades of marriage behind them and four grown children. “People these days leave at the first sign of trouble. Marriage has to be intentional. It is something that you have to work at each day. You can’t take any days off,” Artis insists. Tanya agrees and says you have to learn how to disagree when the time comes. “I don’t know any couple that does not have problems or disagreements. But you have to minister to each other. Hold each other accountable. Work it out because there will be hard times.” Their greatest piece of advice is to never go to sleep angry, although it is easier said than done. “If we have to stay up late talking it out… we make sure to not let things go unresolved. We are conscious about what we say and how we say things to each other,” Tanya says

“Marriage has to be intentional.” – Artis Wilson

In addition to being intentional about marriage, the couple emphasizes the need to keep things fresh and exciting and making sure to build each other up. The Wilsons say planning frequent date nights, whether cheap or expensive, and even sending sweet thoughts to each other throughout the day have helped to keep their marriage fresh. Tanya insists that you can’t be afraid to keep things spicy in the relationship. “Keep the sex alive. Enjoy that with your husband or wife. When you find yourself alone in the elevator with your mate, don’t be afraid to steal a kiss or grab a feel,” she says playfully laughing. “And ladies, just like you like compliments, your man needs to hear them from you as well. Men need to be built up with confirmation and compliments, also.”

“Learn how to disagree.”- Tanya Wilson

On the subject of children, the tandem agrees that a team effort takes a marriage a long way when raising kids.  Rearing children is not as hard as couples make it seem. Not forgetting that your spouse comes before the children,by biblical standards, is how the couple says they were able to sustain their lives and marriage while raising their four boys. As their children grew up, they took shifts making sure their sons were taken care of. Artis says the man has a great responsibility to do more than the status quo in helping raise children. “Men, step up. You don’t know how much you will bless yourselves if you help your wife with the load. If she is too tired after working and taking care of the children by herself, she won’t have anything left to give to you at the end of the day, especially not intimacy.” Demonstrating effective communication, team work, and respect for each other is a great foundation for teaching kids, they say. “They are learning from you. They will learn how to treat their future spouses and children based off what they see from you, “says Tanya. She admits that she had to be patient when asking for help and showing Artis how to help her care for the kids. “But we worked it out. Wives need to communicate that they need help from their husbands.”

“Demonstrating communication, team work, and respect for each other is a great foundation for teaching kids.” – The Wilsons

The couple serves in the Worship and Arts Ministry together at Crossover Bible Fellowship and have a great passion for music.

To dating couples, Tanya says being open to communicate and get to know each other are paramount on the road matrimony. She insists that getting to know each other, flaws and all, are key to a successful relationship. And when the other partner’s flaws bother you, be open about that too.  You have to be receptive to constructive criticism from your mate. “I am not saying nag the other person about what they do wrong in your eyes, but let them know. Pops [Artis} tells me what I am doing wrong when it comes time. I don’t like to hear it all the time, but I have to hear him out and try to fix it. I would rather hear it from him than someone else.” In the same vein, she says confiding in others about problems in a marriage or relationship can get tricky if not done the right way. “Confide in others who have your best interest at heart. And never ever bad mouth your mate to anyone, especially not family or friends.”

All in all, the Wilsons urge couples to keep life and love fun. Life is short. Enjoy each other. Have each other’s back. Be best friends. Be intentional.